Since its inception in 1990, Daystar has gathered and preserved a wide range of historical items related to Christian Science and the Bible including books, audio recordings, periodicals, art, and artifacts. 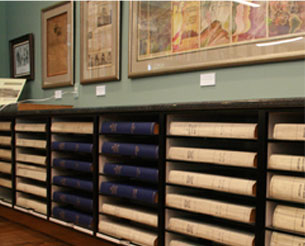 Daystar collections include early editions of Mrs. Eddy’s published writings, original letters written by Mrs. Eddy, reminiscences prepared by those who knew her, and numerous books and other publications about her and the emergence of Christian Science in nineteenth-century America. If you would like to donate items to our collection, contact us.

Jewel Spangler Smaus was a lifelong Christian Scientist and a dauntless researcher of Mrs. Eddy’s life and her family. Although a native Californian, Mrs. Smaus had the opportunity to live for several years in Bow, New Hampshire, Mary Baker Eddy’s birthplace, which greatly enriched her research for her book Mary Baker Eddy: The Golden Days, published by The Christian Science Publishing Society in 1966.

The Smaus collection includes schoolbooks Mary Baker would have used, published sermons written by the Congregational ministers she knew as a young girl, histories of the towns in New Hampshire where Mrs. Eddy and her family resided, and numerous books, magazines, and pamphlets relating to nineteenth-century New England. Mrs. Smaus’ collection also includes material on the antebellum South (where Mrs. Eddy lived briefly as a young wife), as well as background on Mrs. Eddy’s son, his family, and their life in South Dakota. A series of Mrs. Smaus’ taped interviews with Mrs. Eddy’s grandson, George W. Glover III, is a highlight of the collection.