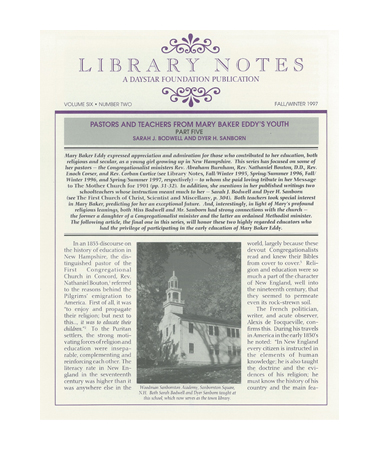 Mary Baker Eddy expressed appreciation and admiration for those who contributed to her education, both religious and secular, as a young girl growing up in New Hampshire. This series has focused on some of her pastors, Congregationalist ministers, to whom she paid loving tribute in her Message to The Mother Church for 1901 (pp. 31-32). In addition, she mentions in her published writings two schoolteachers whose instruction meant much to her – Sarah J. Bodwell and Dyer H. Sanborn (see The First Church of Christ, Scientist and Miscellany, p. 304). Both teachers took special interest in Mary Baker, predicting for her an exceptional future. And, interestingly, in light of Mary’s profound religious leanings, both Miss Bodwell and Mr. Sanborn had strong connections with the church – the former a daughter of a Congregationalist minister and the latter an ordained Methodist minister.

This issue honors these two highly regarded educators who had the privilege of participating in the early education of Mary Baker Eddy.