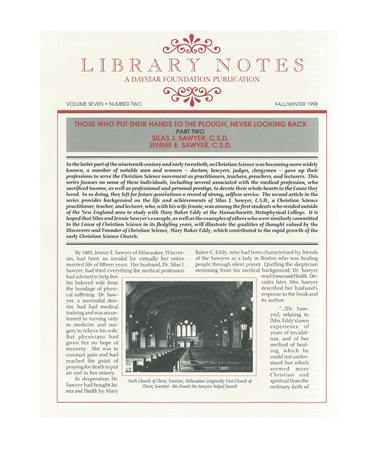 In the latter part of the nineteenth century and early twentieth, as Christian Science was becoming more widely known, a number of notable men and women – doctors, lawyers, judges, clergymen, professors – gave up their professions to serve the Christian Science movement as practitioners, teachers, preachers, and lecturers. This series focuses on some of these individuals, including several associated with the medical profession, who sacrificed income, as well as professional and personal prestige, to devote their whole hearts to the Cause they loved. In so doing, they left for future generations a record of strong, selfless service.

The second article in the series provides background on the life and achievements of Silas J. Sawyer, C.S.D., a Christian Science practitioner, teacher, and lecturer, who, with his wife Jennie, was among the first students who resided outside of the New England area to study with Mary Baker Eddy at the Massachusetts Metaphysical College. It is hoped that Silas and Jennie Sawyer’s example, as well as the examples of others who were similarly committed to the Cause of Christian Science in its fledgling years, will illustrate the qualities of thought valued by the Discoverer and Founder of Christian Science, Mary Baker Eddy, which contributed to the rapid growth of the early Christian Science Church.