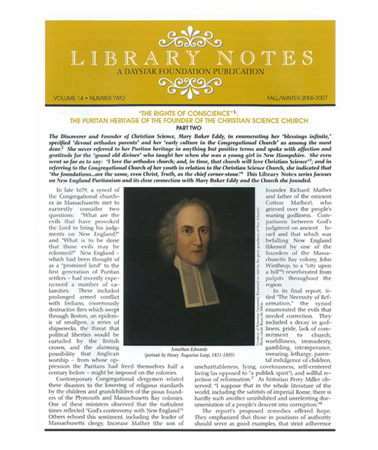 “‘The Rights of Conscience’: The Puritan Heritage of the Founder of the Christian Science Church,” Part Two

The Discoverer and Founder of Christian Science, Mary Baker Eddy, in enumerating her “blessings infinite,” specified “devout orthodox parents” and her “early culture in the Congregational Church” as among the most dear. She never referred to her Puritan heritage in anything but positive terms and spoke with affection and gratitude for the “grand old divines” who taught her when she was a young girl in New Hampshire. She even went so far as to say: “I love the orthodox church; and, in time, that church will love Christian Science”; and in referring to the Congregational Church of her youth in relation to the Christian Science Church, she indicated that “the foundations…are the same, even Christ, Truth, as the chief corner-stone.” This Library Notes series focuses on New England Puritanism and its close connection with Mary Baker Eddy and the Church she founded.