The way in which modern culture takes for granted the fidelity of the recorded music reproduced by the ubiquitous devices inhabiting our technologically saturated world would shock Thomas Edison.  For him, the hollow, wavering wash of scratchy pops cycling over the tinny, muffled sounds reproduced by a stylus riding over the grooves of a tin-foil-wrapped metal cylinder was a revelation in 1877.  It was in late December of that year that the young American inventor and audiophile was first able to record and playback recognizable sounds on what he called a phonograph cylinder.

Edison quickly found that tin foil was not the most durable surface material for the multiple playbacks consumers would expect, so he moved towards producing recordings on sturdier wax cylinders, which were also much more viable for mass production.  Soon the sales of what began to be popularly called “records” were sky high and phonograph players appeared in forms and sizes ranging from suitcases to credenzas.

Advances were made in the industry, and more durable wax cylinders arrived on the market, which soon gave way to celluloid (a type of plastic) cylinders, which provided even more durability for many more playbacks than the wax variety could withstand.  With each advance in the technology over the years, the playback times grew from a scant (and scratchy) two minutes, to a virtual “long play” (and still scratchy) version lasting up to four minutes!

This is the part of the phonograph cylinder’s story that brings us to the item in Daystar’s archival collection.  The Edison Blue Amberol cylinder, of which Daystar’s example is representative, was the inventor’s most advanced type when it hit the market in 1912.  Its durability had been much improved over previous versions due to its plaster of Paris core, which proved to be sturdier than cardboard and less expensive to mold than a metal core.  But despite its comparative durability for its day, the plaster of Paris core in existing collectable examples must be carefully stored due to its sensitivity to extended exposure to moisture or very low temperatures.  Daystar’s example has a very suitable home in the library’s climate-controlled vault (when it is not out on exhibit).

The release of the Edison Blue Amberol cylinder represents the format during the peak of its popularity with consumers.  In just a few short years after the version’s debut, this type of audio media would quickly fade.   Soon the more durable and easy-to-store, double-sided gramophone record disc overtook the phonograph cylinder in sales, and Edison discontinued its production in 1929.

Mary Baker Eddy’s Communion Hymn (title #2170 in the Edison catalog) was just one of the selections in a new release of titles announced to Edison dealers in its Christmas catalog of December 1913 and was first offered for sale to the public in February of 1914.  The performance is credited, on the cylinder and its packaging, to the Edison Mixed Quartet, essentially the Edison company’s own in-house vocal ensemble.  Sung in the popular style of the day, the spirit of the message seems a bit lost in the execution of the hymn, but the rapidly growing numbers of Christian Scientists at that time surely would have appreciated the opportunity afforded by this new technology to listen to a favorite hymn whenever they chose. 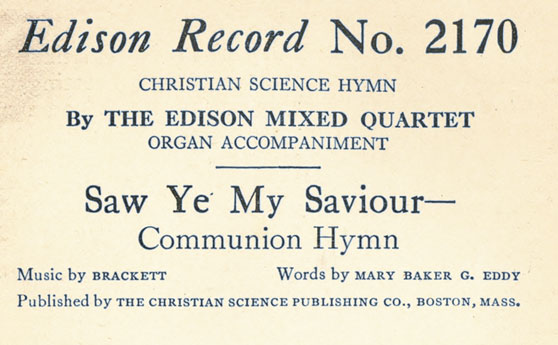 When Daystar staff members were processing the collection containing this unique item, there was an immediate desire to hear it!  But since Daystar does not have a machine on which to play back this audio format, research was done to find out more about this unfamiliar recording medium.  It was discovered that the Department of Special Collections at the library of the University of California at Santa Barbara (UCSB) had undertaken a Cylinder Preservation and Digitization project.  Searching their holdings yielded a thrilling result:  UCSB Special Collections held an example of the exact same cylinder recording in their collection and had also digitized the recording and made it available for listening on its website.

While it may not be the pristine digital sound we have today, there is something moving about the authenticity and sincerity of this performance from the early days of Christian Science.  Enjoy listening to this one-hundred-year-old recording of Mary Baker Eddy’s beloved Communion Hymn (Audio courtesy of University of California at Santa Barbara Special Collections Department Cylinder Preservation and Digitization Project).