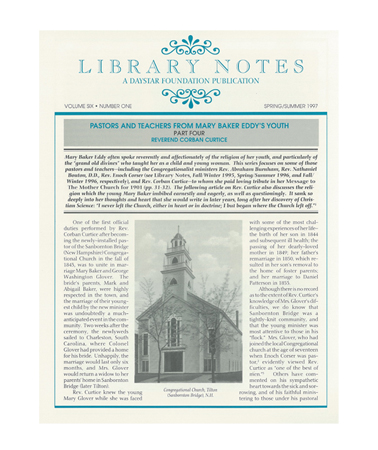 Mary Baker Eddy often spoke reverently and affectionately of the religion of her youth, and particularly of the “grand old divines” who taught her as a child and young woman. This issue of Library Notes is the fourth in a series that focuses on some of those pastors and teachers. She paid loving tribute to Rev. Curtice in her Message to The Mother Church for 1901 (pp. 31-32). This article, as well as the others in the series, will also discuss the religion which the young Mary Baker imbibed earnestly and eagerly, as well as questioningly. It sank so deeply into her thoughts and heart that she would write in later years, long after her discovery of Christian Science: “I never left the Church, either in heart or in doctrine; I but began where the Church left off” (Message to The Mother Church for 1902, p. 2).